I want to take this opportunity to tell you how these Christian communities are doing, and to keep you up to date on our on-going efforts to support persecuted Christians.

In short, the good news is that the Christian refugees are being cared for.  The bad news is that the situation is bleak and not sustainable. They need—and will continue to need—a substantial amount of assistance.

As you know from the news, the Islamic State has forced perhaps 150,000 Christians, and hundreds of thousands of others, to flee from Mosul, Iraq and the surrounding area of the Nineveh plain.  These refugees have been received into Kurdistan, a region in northern Iraq along the Turkish and Syrian border, which is home to ethnic Kurds (who are Sunni Muslim) and governed by an autonomous Kurdistan regional administration.

Many of the Christian refugees are being cared for in the area around the Kurdish city of Dohuk.  Kurdish communities have been welcoming, and the Christians have been settled in hundreds of small encampments.  Some are in unfinished buildings, some are in buildings intended for other purposes, some are in portable housing known as “caravans,” and still others are living in tents.  The priests in exile who came with their people are doing their best to continue providing the Sacraments, and spiritual needs  to hold their communities together.

However, this situation cannot be sustained much longer.  The Kurdistan Regional Government is hosting more than one million people displaced by the Islamic State, and a further 225,000 people from the war in Syria.  This has increased the population of the region by roughly one third and—along with falling oil prices and financial struggles with the central government in Baghdad—has put the Kurds in a financially desperate situation.  A recent World Bank report summarizes the grim financial realities facing the region: “The Kurdistan Regional Government is facing a multifaceted and complex crisis compounding concurrent and mutually aggravating security, political, economic, and social risks.” It is essential that these communities become self-sustaining during their potentially years-long exile in northern Iraq. SPC has begun a number of financial bolstering programs to make this a reality, but we must also think about the children of the refugees.

Bishop Rabban al-Qas of the Chaldean Catholic Church, described with some justifiable pride how the Church there had organized itself to help provide for the material and spiritual needs of the huge number of Christian refugees. His longest-term ambition is to build a six schools to teach the children of these Christian refugees. Schooling is nearly impossible to come b for Christians. The local schools teach in a language unfamiliar to Syrian Christians, and the Arabic-speaking public schools are more Madrassahs for Muslim children to learn their faith than the secular institutions we are used to here in the United States and the West.

Bishop Rabban and SPC are excited to engage in this project, and need your help to fun the next school. It takes only $100 to educate a student for an entire month is Dohuk. With your help, we can make education a reality for the Christians who have had to leave all social structures. In an effort to evaluate the project, SPC will be visiting Dohuk in October and will bring back more information regarding the state of these children.

Please pray for our safe trip and return!

Despite the dire political and economic realities of the region, Christian children need to continue their education. Please open your heart to ease the suffering of so many families

Danke, Yes – But What of the Other Genocide?

God’s Promise and Our Mission at SPC

Bishop Rabban al-Qas Speaks on Future of Christianity in Iraq 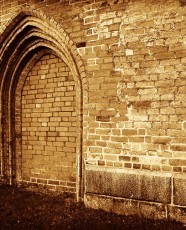 Tell Bishop Rabban that I am praying for the refugees in northern Iraq!